Helge Kaasin is a philosopher working as a design manager at Norwegian Broadcasting Corporation. He is a mountaineer, and Svalbard explorer. He has made TV documentaries from expeditions in Svalbard, and several radio shows on philosophy and black metal. He read Snorri Sturluson at the age of ten, and has since been interested in The Viking Age.

The system and the naming of the cardinal and intercardinal directions called «ætter» is very old and springs from the directions of the winds on the west coast of Norway. For instance «útsuðr» means wind from southwest, from the ocean onto land, while «landsuðr» means wind from land in southeast, when located on the west coast of Norway, that is.

The sun was important for the norse people in many ways. Not only for their crops to grow during the short summertime, but also as an important navigation aid on their long sea journeys. The seafarers made many sun observations throughout the year, and they knew and wrote down the sun's path across the sky in the different seasons. Using these tables they had no difficulty finding the four directions of the sky or determining the latitude on their travels.

In the poem Vafþrúðnismál, the god Odin asks the jötunn Vafþrúðnir about the origins of the sun and the moon. Vafþrúðnir responds:

Mundilferi is he who began the moon,
And fathered the flaming sun;
The round of heaven each day they run,
To tell the time for men.
It is the wolf Sköll that chases the sun, the goddess Sól, across the firmament. Another wolf, Hati Hróðvitnisson chases the moon, the god Máni. And so, time flies.

It takes the sun 1/8, or three hours, to pass an «ætt», and they called the period an «eykt», a word etymologically related to the number eight. So there were eight «ætter» or directions of the sky, corresponding to eight «eykter» or sessions. We still find «eykt» in Norwegian as «økt», used in words like «arbeidsøkt» meaning a work session. 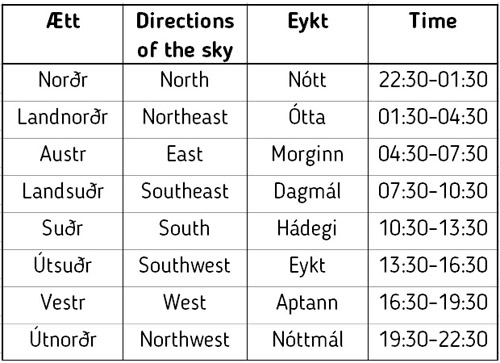 To be able to read off the solar time approximately, the old norse used prominent landscape features on the horizon, as seen from the area of their home or work surroundings. The idea is that the sun should be just above the horizon point in question at the time indicated by the name of the landmark. Thus we have places like Miðmorgunshnjúkur (Mid-morning Peak), Dagmálahóll (Day Mark Hill), and Hádegisskarð (Noon Pass) on Iceland, and Rismålsfjell (Get Up Peak), Dugurdsmålskampen (Lunch Mountain), Nonshø (Noon Hill), og Nattmålstinden (Evening Peak) in Norway.

Some points on the imagined horizon circle had special names, often connected to meal times. For instance, when the sun was positioned in «landsuðrs ætt» and it was «dagmála staðr», it was time for breakfast, around 08:30. When the sun was positioned in «útsuðrs ætt» and it was «eyktar staðr», it was time for dinner, around 15:30. The exact time indication, the names of the eykts and how they relate to our modern clock is difficult to tell from the saga litterature dating back almost 1000 years. The time intervals used on the Eykt watch is what researchers agree on. The names of the eykts varies through time and from place to place, but again, the names used on the Eykt watch is well agreed upon by most scientists, and uses an old norse language form. Later on «nótt» and «nóttmál» was replaced by «nátt» and «náttmál» for instance.

The old norse people were not able to tell time that correctly, and also did not care that much. They did not have the same time pressure as we in modern times have.

This is why the Eykt watch only has one hand. The slow moving of the hand through day and night is meant to have a soothing effect on the modern mind, travelling back in time, to the days of the old norse people. Looking at the Eykt watch is like looking through the eyes of the norse people. Through viking eyes, many years ago.

You can use your Eykt watch as a compass. Take off your watch, and turn it around so the number 12 is on top. Observe the sun, and draw an imaginary line from the sun's position vertically down to the horizon. Note the intersection of this imaginary line with the horizon by means of a landscape feature, a landmark. Now hold the Eykt watch horizontally, parallel to the ground.

If you are in the northern hemisphere, align the hand of the Eykt watch exactly in the direction of the landmark. The 12-hour marker now points to the south, or «suðr».

If it is a cloudy day, you could use a «sólarsteinn», a sunstone, like the norse people used in order to locate the sun. The stone they used was made of the mineral cordierite, tourmaline, andalusite or Iceland spar, acting as a polarizing filter. You could just use some polaroid sunglasses to the same effect.

By pointing the sunstone skyward and rotating it until the light passed through it and reaching its brightest point, the norse navigators could locate the sun, making them able to navigate by the sun also on cloudy days. 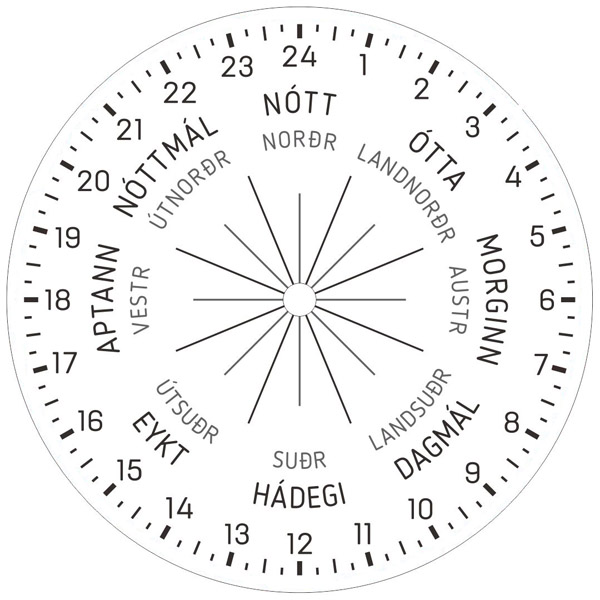 We would be pleased to start a partnership with private resellers, dealers and trade companies. Just send a message to us!